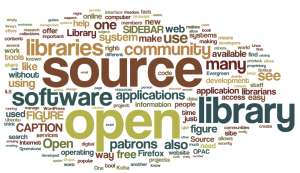 By now most people have heard of source software.  Products like the Android operating system for smart phones and OpenOffice the open source alternative for the Microsoft Office product suite have shown the general public what is possible when the development community maintains software rather than a corporation.  Open source software has also made an impact on libraries.  Several projects have made significant progress and are making their way into mainstream operation in public libraries.  Going beyond basic desktop productivity software such as word processing there are now open source projects for functions such as the integrated library system which is used to manage patron and item data, reserves and bills as well as the online catalog, server and desktop operating systems help desk ticketing systems, self-checkout interfaces  and even phone systems.

There are many great open source projects that can be used in libraries.  One such project is called VuFind.  VuFind is an open source catalog develop that Villanova University.  The university library there use it as their main catalog.  It was so successful that they released into the world and many libraries and library systems use it today.  Westchester Library System uses VuFind for the catalog that is used to serve the correctional facilities within the county.  There is no Internet access in the libraries in the correctional facilities in Westchester.  The WLS IT department modified the VuFind software to provide an offline, standalone catalog that can be used without an Internet connection.