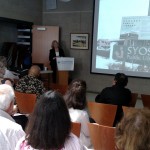 Judith Lockman started the evening off by sharing her experience with the renovation of the Syosset Public Library, where she served as director at the time.  At the start of their project, they quickly moved from a simple renovation to meet current issues to a project that would need to look ahead for decades to keep the library as a welcoming destination place for at least the next 20 years.  One key to this was adaptability and working with an architect who would listen and be flexible.

Their needs included the basics:  more space for public access computers, more programming space, addition of a café.  Field trips were encouraged among the Board Members to see different styles in action.  The café raised many questions, so one library that decided to close their café was visited as well as one that decided on a “nook” version with a seating area and only vending machines.  A café has different rules that are under health board and restaurant requirements, so Syosset decided to go with a combination/”nook” area; and that worked out very well.

Choosing an architect is also a community chore.  One is needed who has a reputation to meet and talk with all parties involved and is interested in the Director’s and Board Members’ vision for the project.  Input from the public is important; but often the public is not aware of the business transactions of the library—how the materials are delivered and processed—making input from the staff essential regarding workflow.  The building should help the staff do their job.

Ray Beeler spoke about this process for the Syosset project.  It is important to carefully think through a project in the beginning.  However, an architect must be willing to listen and seek out input from the public to bring the community along in the process.  The Syosset Public Library project had a $13.2 Million 30-year bond vote with a 2/3 Yes vote.   The stages of construction and floor plans can be seen from the slide presentation made.

The library offered modified/”drive through”-type services to the public as the renovation took place.  Once the construction was completed, the library allowed for staff time to give tours of the new library and they even had a FAQ page made up so that the library staff would be able to easily answer questions about the renovation project.  They even coined a catch phrase of “tastes vary” in order to answer the many comments about colors and design choices made.  Overall, the new library turned out differently than when the project started and has been embraced by and has truly become a destination place for their community.

Bellmore Public Library was the second project that Ms. Lockman and Mr. Beeler covered.  This project started with a needs assessment done by the architect that involved interviews with both full- and part-time staff members.  The results were brought back to the library board, which indicated that doing smaller renovations would not improve the functionality of the library.  A wrapper around the building was planned to increase the library from 2,800 to 4,000 square feet.  The planned development would add needed space for the children’s area and re-establish a front entrance.  This project also went out for a public bond vote in the amount of $8.9 Million.  In order to get people to vote yes, which means paying more taxes, it is essential to present something that makes sense.  Incorporate assistance from a financial advisor in order to determine the overall project costs; what the cost would be for each tax payer; and be clear about what the tax payer will be getting for those costs.  For this project, the Bellmore Public Library determined that the annual cost to a tax payer would be $71/year for 15 years or less than 20 cents per day in exchange for a beautiful community center.  In their publicity and informational flyers, they described the results of the construction in detail and coordinated a core group from the community to act as ambassadors for the project.  The result was a 2/3 yes vote, and today they have a wonderful new building that will service their community well into the future.