Librarians, library directors, library trustees, government officials, and friends of libraries gathered on November 20 for the 55 Annual Meeting of the Westchester Library System (WLS) at the Sheraton Tarrytown. 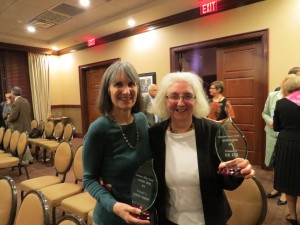 The highlight of the evening was the presentation of the second WLS Trustees Award. A total of 14 people representing 9 Westchester libraries received nominations for the Award, which was given for a commitment to provide open access to information and resources that foster innovation, inspiration and lifelong learning based on broad impact, innovation and collaboration. This year’s Award was presented to co-winners: Sue Feir, Director of the Hastings-on-Hudson Public Library, and Barbara Morrow, President of the Friends of the Hastings-on-Hudson Public Library.  A number of their accomplishments were highlighted.

The co-winners were presented with a check in the amount of $1,000 to the Hastings-on-Hudson Public Library, funded by the WLS Trustees. New York State Legislators Thomas Abinanti [92 AD] and Steven Otis [91 AD] were on hand to congratulate the co-winners; and Westchester County Legislator MaryJane Shimsky [12 CLD] declared November 21st Sue Feir and Barbara Morrow Day.  All of those nominated (as shown below) were recognized for their outstanding contributions: 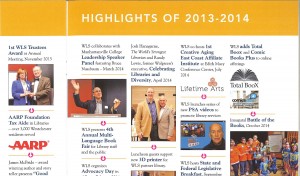 Terry Kirchner, WLS Executive Director, gave an overview of WLS’s accomplishments in 2014, many of which were noted in the distributed WLS Annual Report 2013-14.

One important task of 2014 concerned the Integrated Library System (ILS).  WLS will continue with the current vendor SirsiDynix and further educate staff about open source products. This well thought-out decision represented a huge time commitment by all who participated on the WLS-Public Library Directors Association (PLDA) ILS Committee.  Other key areas for 2015 identified in conjunction with PLDA include:  providing more eContent; supporting program initiatives such as Creative Aging workshops and Makerspace activities; expanded marketing and further promotion of services available at local libraries; enhanced wireless services with printing options; and of course, training for the ILS and exploring open source products. 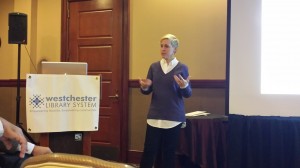 Keynote speaker was Kerri Willette, New York’s first Empire State Digital Network (ESDN) Manager.  Ms. Willette is responsible for coordinating activities of the ESDN, a statewide service hub for the Digital Public Library of America (DPLA), which is being administered by Metropolitan New York Library Council (METRO) in collaboration with eight allied regional library councils collectively working as NY 3Rs Association, Inc.  Ms. Willette gave an overview of the DPLA, which was launched in 2013 with 7.1 Million searchable digital objects, and spoke about what it takes to share data with the DPLA, which is not merely another search engine but a new tool that will help library’s special collections be discovered.  One of the roles of the ESDN will be to contact regional libraries to find out what is being collected and making all libraries aware of how to contribute their content properly.  The DPLA’s progress can be followed via the ESDN website and social media [@NYSdigital]; and Ms. Willette’s presentation has been posted to the WLS website.