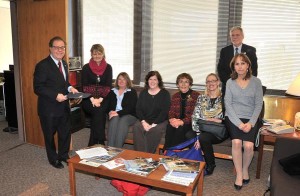 We visited all the offices of the 14 legislators who represent Westchester County in the following order: 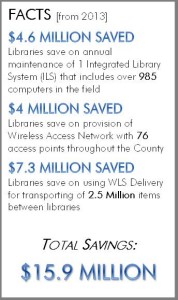 Our main ask of the legislators was to have Library Aid funded to the full extent of Education Law or $102.6 Million.  This year’s proposed Executive Budget for FY2015-2016 included only $86.6 Million in Library Aid, an amount which reflects levels equivalent to 1997.  The cost of living alone has risen 47% since then!  Assemblyman Thomas Abinanti, Chair of the Assembly’s Libraries and Education Technology Committee, has sent a letter to Carl Heastie, Speaker of the Assembly, and Herman Farrell, Chair of the Assembly Ways and Means Committee, in support of additional aid for libraries.

Through the efficient, centralized services provided by the public library systems, like Westchester Library System, millions are saved:

For those who could not attend Library Advocacy Day in Albany, a postcard campaign was held at the libraries in Westchester.  Over 1,700 postcards were sent to our Legislators. 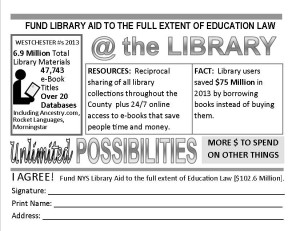 Thank you to this year’s dedicated group of Library Advocates—for all the ways in which you participated!   Library Aid is only 1/10 of 1% of the total State budget, and you helped to make our voices heard!

To quote a recent article by Joe Queenan in March 2015 edition of The Rotarian:

The public library is an indispensable institution that somehow manages to get taken completely for granted. Like the clouds above us, like the birds that fill those skies, it is a glorious creation that is hiding in plain sight. Society pays little attention to it, even though society cannot survive without it. Not any real society.

Let’s not take our libraries for granted.  The deadline for an on-time budget is March 31st, so there is still time to contact your legislator and ask them to sign on to Thomas Abinanti’s letter.  You can also click here for NYLA’s Online Advocacy page to send an email message to our legislators that libraries are an excellent investment in New York’s educational and cultural infrastructure.