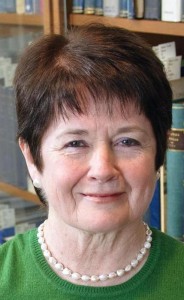 On November 14, 2012, Westchester Library System held its 53rd Annual Meeting at the Historic Hudson Valley Library’s new Headquarters & Library in Pocantico Hills. Even though many were still reeling from Hurricane Sandy, more than 50 people came out to represent our member libraries and enjoy each other’s company.

After the official business, WLS Executive Director, Terry Kirchner, gave a brief overview of the year’s past activities and unveiled WLS’s new logo.  An annual report was compiled for 2011-2012.  Again, due to Sandy, the full shipment of the reports was delayed and enough copies of the report were unavailable at the time of the meeting.  However, a distribution to each library will be made; and copies of the report are now available by contacting WLS Development Director, Pat Braja, at 914-231-2341.

Maureen Sullivan, President of the American Library Association, was the featured speaker.  Ms. Sullivan is a consultant to numerous libraries and a professor of practice in the Ph.D. program, Managerial Leadership in the Information Professions, at the Simmons College Gradual School of Library & Information Science.  She also was honored with ALA’s Elizabeth Futas Catalyst for Change Award in 1999. During the meeting, she was quick to start by noting how libraries are at the cutting edge of the changes happening in our world and how they are uniquely positioned with talented staff to help their communities embrace those changes.

However, there is a lot of pressure these days to perform differently; yet we must learn as we do.

Libraries are among the most trusted agencies; they value collaboration.  The promise of libraries to transform communities requires not civic engagement but community engagement.  We may not believe we have the skill to do it, but libraries are in a unique position to step in.  Ms. Sullivan spoke of a few of her Presidential initiatives:  one was to re-think ALA’s role as a professional organization and to get them to be more global.  The other is the training of library leaders as effective conveners.  Based on the book The Work of Hope by Richard C. Harwood, this initiative will seek to show library leaders how to identify the needs of their community and how they can step out to meet those needs in a meaningful way.  Some topics to be covered include:  being a coach; embracing the convener role; facilitating meetings; building sustainable personal relationships; and developing plans for follow-up.

In the weeks following our Annual Meeting, Ms. Sullivan announced an upcoming program in April 2013 entitled, “Strategic Liaisons: Game-Changing Conversations.”  This program will be held in conjunction with the Special Libraries Association (SLA) and will be held in Greenbelt, Maryland.