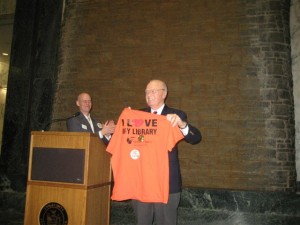 A group of 23 library supporters from Westchester car pooled up to Albany to join the New York Library Association’s (NYLA) Library Advocacy Day on Tuesday, March 5th.  The group was made up of directors, trustees, and staff from all of our member libraries, as well as Westchester Library System and Westchester Library Association. We visited the offices of the 14 legislators who represent Westchester County. This year’s emphasis with all legislators was restoration of Library Aid to $102 Million vs. the $89.9 Million included in Governor Cuomo’s Executive Budget.

WLS President Dave Donelson sums it up best in his blog post.

Library advocates from across New York State filled up the Legislative Office Building’s “Well” at the Rally hosted by NYLA which featured speakers Senator Hugh Farley and guest speaker David Vinjamuri.  A special thank you is due to this year’s great group of Library Advocates.  All contributed in some way—sharing insightful success stories from their libraries, taking pictures, driving, writing, tweeting, participating!

Since our visit, the Senate has included a proposed restoration of $4 Million in Library Aid for the FY 2013-14 Budget.  However, the NYS Assembly has not followed suit, including only the $89.9 Million the Governor proposed in his Executive Budget.

There is still time to contact your legislators!  Check out NYLA’s Virtual Advocacy Effort page for resources to show your support for libraries via social media as well as NYLA’s Online Advocacy page to contact your Assemblyman. The deadline for an on-time budget is March 31st.

Libraries do provide essential services—let’s be sure our legislators understand the value they bring to New York.